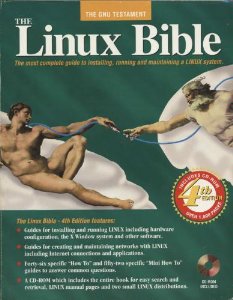 My first experience with Linux was in the early to mid-90s with Yggdrasil Linux.  I picked up a book aptly titled “The Linux Bible” which had a CDROM inside the book jacket.  I thought it would be cool to install this onto my Packerd Bell 486-DX2.  At the time, the Packerd Bell PC had Windows 3.11.

Honestly, as I looked at the terminal prompt and browsed around the directories and listing the contents of all the files (mostly programs), I remember having a creepy thought about the operating system being “alive”, like it had a consciousness.  Yup weird.

I remember investing a lot of time week after week, month after month just looking at all the programs in /bin, /usr/bin, /sbin, /usr/sbin, /local/usr/bin, /local/usr/sbin and thinking to myself “what do you do?” while execing them with a childish curiosity.

For reference, I liken this to picking up an encyclopedia or dictionary and just flipping pages for the heck of it.

Although during this period in my life I would submit to you that I was living a meager lifestyle with a diet consisting of hotdogs and ramen-soup noodles.  I was poor with a mountain of debt and barely getting by on my own.  So you see I had plenty of time to learn something new and for self improvement.

I don’t think many folks have heard of Yggdrasil Linux.  That’s understandable since it looks like Yggdrasil Linux was published between 1992 and 1995.  This was still an early time for Linux.