So there I was working away and noticed that my MacBook Pro (MBP) was running a bit sluggish.  It had been a very long time since rebooting it so I thought I would shut it down and restart it.

Here is a capture of my hardware/software 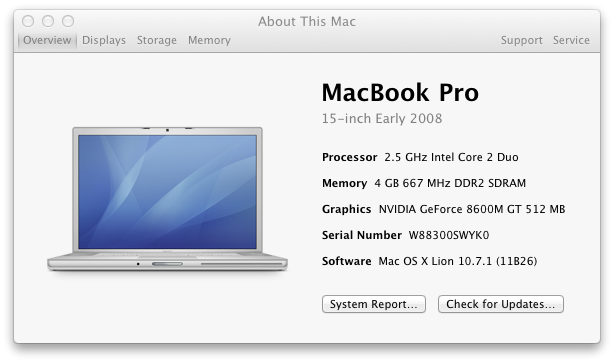 Well it shutdown just fine, but that was about it.  It didn’t restart.  My first thought was I must of hit the wrong menu option and “shutdown” instead of “restart“.  When I pressed the “on/off” button nothing happened.  No sound, no flicker of the LCD, nothing.  Well almost nothing, the front LED came on for a very brief second and then it went dark.

This was a very odd experiance as usually there will be a BIOS beep of sorts or a form of indication (visual or autible) to inform the user of a problem.  After some searching around the Internet and on Apple’s web site I decided it was time to carry the silve work-horse to the Apple store.

At the genius bar I was lead to beleive my MacBook Pro was in outstanding condition for it’s age.  I felt good about this and made it a point to let them know the MacBook Pro had been halfway around the world with me.

They diagnosed the issue and indicated it had to be sent away for repair.  The wonderful part about this was they said Apple would fix it for free!

So I felt great… I thought about what a great investment the MacBook Pro has been.  This is the first trouble I’ve had and it’s not going to cost me to fix it.

Apple already had my repeat business due to the performance and quality of the MacBook Pro (early 2008 model) but now they really showed me how much they believe in their product.

We use cookies to ensure that we give you the best experience on our website. If you continue to use this site we will assume that you are happy with it.Ok